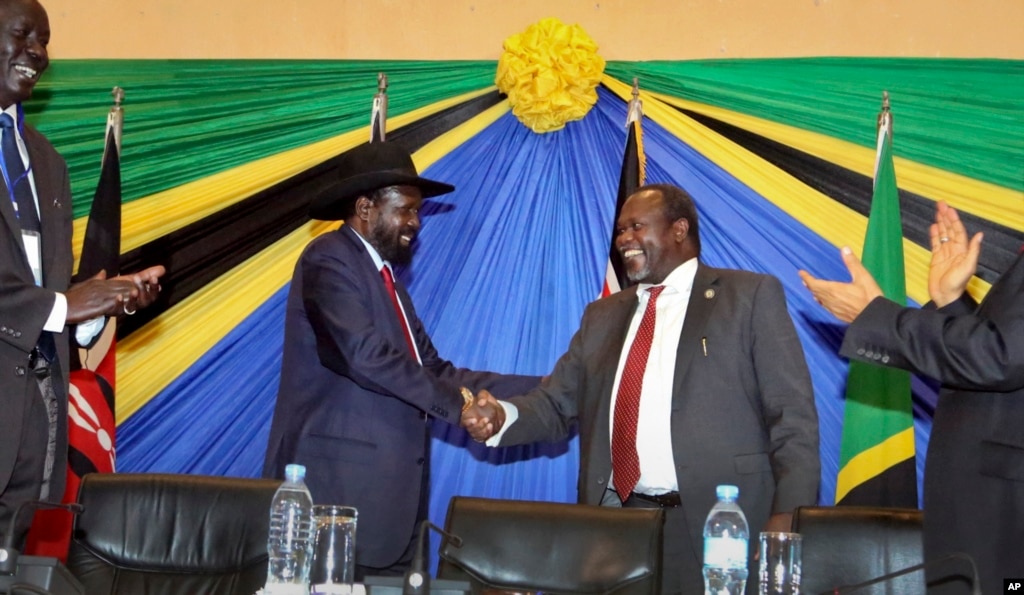 South Sudan’s President Salva Kiir has re-appointed his rival Riek Machar as vice president, a decree said on Thursday, the culmination of a deal to try to end months of civil war in the world's newest nation.
The announcement returned the presidency to where it was soon before fighting erupted between supporters of the two men in December 2013 - a conflict that went on to kill thousands of people and force more than two million to flee.
Both sides, under pressure from Washington, the United Nations and other powers, signed an initial pact in August, and agreed to share out ministerial positions in January.
But that accord has repeatedly broken down and a U.N. report last month said both leaders qualified for sanctions over atrocities in the conflict.
The decree read out on state TV said Machar would be first vice president, his position before he was sacked in 2013, the move that eventually triggered the violence. There was no immediate announcement from Machar.
Oil-producing South Sudan split away from Sudan in 2011 amid mass celebrations and promises of aid and good will from most of the developed world.
But its regional and Western backers were dismayed when fighting erupted, often along ethnic lines.
Last month's confidential report by a U.N. panel that monitors the conflict in South Sudan for the Security Council stated that Kiir and Machar were still completely in charge of their forces and were therefore directly to blame for killing civilians and other actions that warrant sanctions.
According to the report, those violations include extrajudicial killings, torture, sexual violence, extrajudicial arrest and detention, abductions, forced displacement, the use and recruitment of children, beatings, looting and the destruction of livelihoods and homes.
The report described how Kiir's government bought at least four Mi-24 attack helicopters in 2014 from a private Ukrainian company at a cost of nearly $43 million.
It added that Machar's forces were trying to "acquire shoulder-fired anti-aircraft missiles to counter the threat of attack helicopters, specifically citing the need to continue and indeed escalate the fighting."
Source: http://www.reuters.com/article/us-southsudan-unrest-idUSKCN0VK2AO
Tag(s) : #Afrique de l'Est