A former minister of mines in Guinea was arrested on Tuesday on U.S. charges that he laundered bribe payments he had accepted to help award a Chinese conglomerate valuable rights, including near control of the West African country's mining sector.

Mahmoud Thiam, a U.S. citizen who served as Guinea's minister of mines from 2009 to 2010, was accused in a criminal complaint filed in Manhattan federal court of accepting about $8.5 million from the Chinese conglomerate.

The complaint said Thiam used that money to, among other things, reimburse an associate who helped him buy a 30-acre, $3.75 million estate in New York state, enroll his children in private schools and pay $46,375 to a piano company.

Andrew Solomon, Thiam's lawyer, declined to comment. But in court, he called the conduct at issue "quite ancient," and questioned why Thiam would have disclosed those bank accounts to the court when there was no evidence he had money in them.

"There's nothing here other than a lot of smoke," Solomon said.

The Chinese conglomerate was not named in court papers, but a key deal in the case matched the description of an agreement reached in 2009 involving a joint venture majority owned by China International Fund and China Sonangol.

China International did not respond to an email seeking comment. China Sonangol could not be immediately reached. Both companies during the period in question had the same address in Hong Kong.

The complaint said that Thiam had helped the unnamed Chinese conglomerate receive valuable rights in a wide range of sectors in Guinea's economy, including near control of the country's mining business.

He received $8.5 million from its senior executives and officers, the complaint said, money that was deposited into a Hong Kong bank account that Thiam established by concealing his nationality and position as a public official.

In court, Kobre contended Thiam was not being candid about his assets when detailing them to court officials, claiming to only have $30,000 in assets despite a $1.2 million annual income and holding multiple accounts and companies worldwide.

Solomon denied that Thiam was trying to conceal anything, however, saying he had long had problems with the U.S. Internal Revenue Service, which property records show has taken out millions of dollars in liens on his apartment. 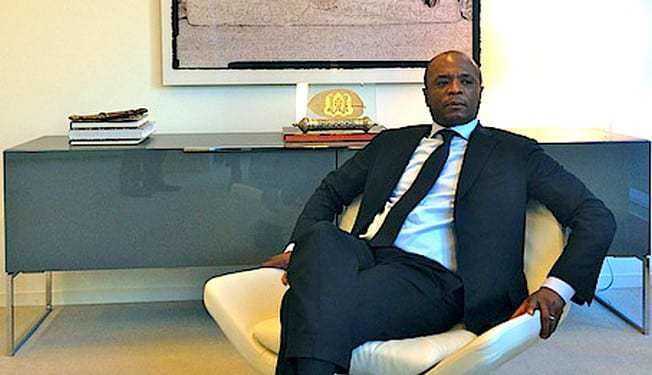