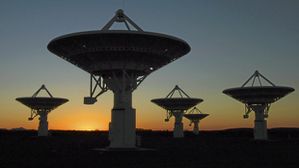 Pundits are calling it the World Cup of scientific research. And this time, unexpectedly, Africans could emerge as the winners.

In an increasingly intense contest, two continents are tussling over a prize worth an estimated $3-billion: the right to host the world’s most powerful radio telescope and its potential discoveries about extraterrestrial life and the origins of the universe.

There are growing reports that South Africa and its eight African partners will win the prize, despite a strong bid by Australia and New Zealand. The decision could transform Africa’s image, giving a dramatic boost to the scientific capacity of a continent that has traditionally been a technological laggard.

Officials from around the world, including Canada, gathered in Amsterdam this week to consider a site for the Square Kilometre Array (SKA) – the massive telescope whose receptors would have a combined surface area of a square kilometre. It would be one of the biggest international scientific projects of the next decade.

The competition is starting to gain a nasty edge, with South Africa’s science minister complaining that Australia is “insulting” the Africans by suggesting that the “sympathy” factor will favour the poorer continent.

On Wednesday, after the Amsterdam meetings, officials said they will postpone the site announcement until mid-May, allowing more time to study a possible agreement to share some aspects of the project between the two main bidders.

In its scale and ambition, the project is unprecedented. The telescope would be 50 times more sensitive than any other on the planet, and its computers would be 10,000 times faster. It would peer further back in time – and further out into space – than any telescope before it, offering the first serious chance of discovering life in other galaxies and the best chance of unravelling the mysteries of the universe before stars were born.

The latest reports suggest that a panel of experts has recommended Africa as the preferred site, rather than the Pacific bid. If the advice is accepted, it would have profound implications for the world’s poorest continent.

“It’s an enormously exciting prospect,” said Bernie Fanaroff, a former astronomer and aide to Nelson Mandela who is now the director of South Africa’s SKA project. “It just changes the way people see us – and the way in which we see ourselves. Until now, Africa was not generally thought of as a place where you do world-leading revolutionary science or technology.”

Africans have won Nobel prizes as writers and statesmen, but they have never won a Nobel for scientific research conducted in Africa. The SKA project would almost certainly produce the first Nobel prizes to be awarded to Africans for scientific achievements on their own continent, Mr. Fanaroff predicted.

He compared it to the soccer World Cup of 2010. “South Africans were immensely proud of hosting such a successful World Cup,” he said. “How much more proud are we going to be if we host the world’s most ambitious science project – and a project which is almost certain to give rise to Nobel prizes?”

Until now, telescopes that searched for extraterrestrial life were only sensitive enough to detect a strong signal or direct communication from another planet. But the SKA telescope would be so powerful that it could detect even the traces of normal life in other galaxies – the leaked ambient radiation from a civilization that might exist as far as 50 light years away.

And that would be only a small part of its capacities. The telescope could peer back into the dawn of time, before the first stars existed, examining the dark matter and dark energy that emerged after the Big Bang. It could test the theories of Albert Einstein. It could study how galaxies evolve, the nature of gravity, and how black holes were formed.

Last month, Canada formally joined the consortium of countries that will finance the SKA project. Canada could eventually contribute up to $250-million to the project, although federal officials are refusing to comment.

Others in the consortium include Britain, Italy, the Netherlands and China, plus the bidding nations of South Africa, Australia and New Zealand. All of those countries, except the bidders, will cast votes for the winning bid.

The telescope’s receptors must be located in a remote unpopulated region without any interference from cellphones, televisions signals or other devices, which helps explains why South Africa and the Pacific countries are the leading bidders.

If South Africa wins the bid, about 3,000 satellite dishes will be spread across thousands of kilometres of its deserted Karoo region, each dish 15 metres in diameter, collecting radio waves and feeding huge amounts of data into a central computer for analyzing. Satellites in eight other African nations, from Namibia to Ghana, will also be linked into the computer.

Construction would probably begin in 2016 and would be completed by 2020, creating an estimated 5,000 jobs.

Africa is already making great strides in astronomy and astrophysics, emphasized Mr. Fanaroff, with new university astronomy programs emerging recently in countries such as Kenya, Mozambique, Ghana, Mauritius and Madagascar. Hundreds of young African scientists and engineers are getting jobs and bursaries from the early stages of preparation for the SKA project.

Mr. Fanaroff said he also believes the SKA project could be a major boost for the African economy. Its requirements could create new high-tech industries, based on an emerging expertise in fast data transport, fast computing and mass data processing from linked networks of sensors, he said.

With a decision approaching, the battle between Africa and the Pacific has turned fierce. Australia is alleging that some European governments might favour the African bid as a form of “affirmative action” for an impoverished region. “The thing that works against us most is the European sympathy for doing more in Africa,” Australian science minister Chris Evans told an Australian newspaper.

One Australian newspaper, the Financial Review, concluded that Australia had simply “underestimated the Africans and the strength of their bid.”