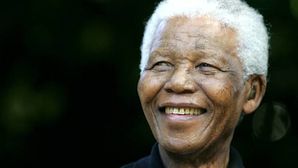 South Africa’s liberation hero, Nelson Mandela, has died. He died peacefully at his Johannesburg home, with his family around him, at 8:50 p.m. on Thursday night, President Jacob Zuma has announced.

“Our nation has lost its greatest son; our people have lost a father,” Mr. Zuma said in a somber speech to the nation just before midnight, broadcast on all major television channels.

“He is now resting. He is now at peace …. Although we knew this day would come, nothing will diminish our sense of a profound and enduring loss.”

Mr. Mandela, the 95-year-old hero of the anti-apartheid movement and the first democratic president of South Africa, had been in critical condition for months. He had been retired from politics for more than a decade and had not appeared in public for the past three years. But his death still comes as a shock to the country.

“This is our moment of greatest sorrow,” Mr. Zuma told the nation in his speech.

He said Mr. Mandela will be given a state funeral, and flags will be lowered to half-mast until the end of the funeral and the series of memorials, expected over the next 10 days.

Hundreds of South Africans, including families with children in nightclothes and pyjamas, began to gather after midnight Thursday night at the Mandela home in the Johannesburg suburb of Houghton, following the late-night announcement.

The crowd was a multiracial gathering, a symbol of Mr. Mandela's legacy. They sang liberation songs and the South African national anthem in an emotional tribute to the man who endured prison and persecution before leading the country to democracy.

Half an hour after the announcement, U.S. President Barack Obama went on U.S. television to express his condolences, quoting Mr. Mandela’s famous speech in 1964 – when he faced the death penalty at the Rivonia trial – about the principles of racial freedom and equality.

A similar tribute came from South Africa’s ruling party, the African National Congress, which Mr. Mandela had led until his retirement. “Our nation has lost a colossus, an epitome of humility, equality, justice, peace and the hope of millions,” ANC secretary-general Gwede Mantashe said.

“The large African Boabab, who loved Africa as much as he loved South Africa, has fallen,” he said. “Its trunk and seeds will nourish the earth for decades to come.”

South Africans will remember “his ever-present smile,” Mr. Mantashe said. “We recall the strength of his fist punching the air as he stepped out of prison after 27 years. And his sternness during the negotiations for the freedom of our beloved country.”

A long line of anti-apartheid veterans and global political leaders went on television in South Africa and around the world to give their sympathies and tributes.

In Canada, Alberta Premier Alison Redford, a former lawyer who worked on legal reform issues in Africa alongside Mr. Mandela, called the leader a friend. “I will always remember him as a dignified and kind man with a sparkle in his eye, who used humor to diffuse tense situations," she said in a statement Thursday.  Ms. Redford's work in Africa in the 1990s focused on human rights litigation, education programs and policy reform initiatives, according to her government biography.

Mr. Zuma urged South Africans to follow the values of its first democratic president. “Let us reaffirm his vision of a society in which none is exploited, oppressed or dispossessed by another,” he told the nation.

“Let us commit ourselves to strive together -- sparing neither strength nor courage -- to build a united, non-racial, non-sexist, democratic and prosperous South Africa. Let us express, each in our own way, the deep gratitude we feel for a life spent in service of the people of this country and in the cause of humanity.”

Mr. Mandela’s struggle for freedom earned him the respect of the world, Mr. Zuma said. “His humility, his compassion, and his humanity earned him their love,” he said.

“Our thoughts and prayers are with the Mandela family. To them we owe a debt of gratitude. They have sacrificed much and endured much so that our people could be free.”