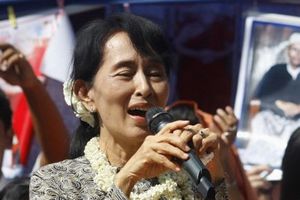 It's campaign season in Burma, but the scenes unfolding along the seemingly endless road between Rangoon and Mawlamyine, 300 kilometers (188 miles) to the southeast, suggest a quasi-religious expectation of salvation, not unlike the response to the Dalai Lama when he visits Tibetan communities in Western countries.

Wherever Burmese politician and popular hero Aung San Suu Kyi turns up these days, she attracts massive crowds. Curious onlookers spend hours waiting just to see the charismatic 66-year-old opposition politician. They carry images of their idol looking like a beaming Madonna figure, and they throw flowers at her convoy as it slowly winds through the narrow, dusty streets.

Whenever Suu Kyi opens the sunroof of her SUV, stands up and graciously greets the people, they reach out to her or hold up their small children. Some in the crowd chant her name and run after the convoy until they eventually stop out of sheer exhaustion or even collapse in the street.

The politician, affectionately known as "the Lady" in Burma, is campaigning for her opposition pro-democracy party, the National League for Democracy (NLD), which is participating in the by-elections for seats in the parliament on April 1. The NLD boycotted the main elections in November 2010 because Suu Kyi was under house arrest at the time and election laws were designed to so heavily favor the ruling military junta that international observers called it a farce. The April election is being held to fill only 48 of the 664 seats in parliament -- but, of course, there is much more at stake.

"Aung San Suu Kyi should bring us democracy. She should lead our country into a happy future," says Daw Thian Aye. "Everyone loves her." Together with the NLD Youth Committee, the 56-year-old has been waiting for hours in front of the upscale Strand Hotel in Mawlamyine for Suu Kyi's departure. Mawlamyine, formerly known as Moulmein, was once the capital of British-controlled Burma. Today, the city is firmly in the hands of NLD supporters.

Like many others, Daw Thian Aye, who runs a small gold shop in the city, is wearing a red headband adorned with the party's emblem, a yellow peacock. "Times are changing, and now everything will work out," she says, expressing an opinion that many hold.

Their optimism stems from a radical change of course by the Burmese government. Only a few months ago, Burma was still in a state of agony. Although Suu Kyi was released from house arrest in November 2010, everyone knew that the junta could re-arrest the politician at any time, as had already happened several times in the past.

The opposition, with its aging and divided membership, presented a bleak picture. The newspapers were being censored, and the monks were still afraid after their uprising was crushed in 2007. Many Burmese felt that the country's riches were being sold off to China by a government that appeared to have made itself overly dependent on Beijing.

The regime had driven the country into isolation for more than 20 years, ever since Suu Kyi was robbed of her election victory in 1990. Under the rule of the generals, what was once a Buddhist paradise had been turned into an impoverished pariah state at the end of the world. In the past, Suu Kyi had even advised tourists to not visit Burma so as to avoid unintentionally supporting its authoritarian leaders with their money.

But now everything seems to have changed. State-run newspapers are suddenly criticizing the regime, while the regime itself is signaling that it no longer intends to do China's bidding. It even canceled the construction of a giant, Chinese-backed hydroelectric dam. Likewise, images of Suu Kyi can be seen on every street corner, tourists are flooding into the country, and the government is weighing plans to build two new major airports.

Meanwhile, Suu Kyi is receiving state guests as if she were already president, and her name is even being mentioned for cabinet posts. "There is a possibility that she will be brought into the government," says an adviser to President Thein Sein.

A Conflict Zone in a Sea of Hope

Indeed, there is a new spirit of optimism in Burma -- but not everywhere. The northeastern town of Laiza, which lies right on the Chinese border, is resonating with fighting songs. "We are KIA soldiers, we are always on the front and we will destroy the enemy with our enthusiasm," the men shout as they march in step across the dusty parade ground. They are recruits with a guerilla force, the Kachin Independence Army (KIA), and their commander is a woman. Since last June, the ethnic militia from Kachin State, in northern Burma, has been at war with the Burmese army, which broke a 17-year cease-fire when it launched an offensive against KIA positions.

What is happening in this remote mountain region is inconsistent with the good news in other parts of the country, where ethnic conflicts are now being resolved. Tens of thousands of refugees are on the move or living in camps, and there are almost daily skirmishes.

The front is less than 20 kilometers from Laiza. Only the high mountains and perhaps also the proximity to China -- a country with which the government cannot afford to be in conflict -- protect the people here from an even worse fate. "The army is waging a war against our people," says KIA General Gun Maw. He is sitting in a ballroom on the fourth floor of the Laiza Hotel, which the KIA uses as its headquarters. On the table in front of him, there are two cell phones, which he uses to keep in contact with the front. On the wall, there are military maps and a portrait of Aung San Suu Kyi.

"Of course we are pinning our hopes on her," says Gun Maw, "and yet we must solve our military problems on our own." The KIA has more than 20,000 soldiers, he says, but since their weapons consist mainly of ordinary rifles and home-made bombs, their only option is to wage a guerilla war. "We ambush the government troops, set remote-controlled bombs and then withdraw," Gun Maw says.

Burma is a multiethnic nation. The overwhelmingly Buddhist Burman make up more than 60 percent of the population, with the remainder belonging to about 135 different ethnic groups. There are also Indian and Chinese minorities. The British colonial troops brought Gurkhas from Nepal, who then settled in Burma. The Rohingya, who the Burmese refuse to grant citizenship, live in the region bordering Bangladesh, and members of the Karen, Chin and Kachin ethnic groups, many of them Christian, live in the west, east and north of the country.

These groups are often militant and have long felt deprived of their rights by the government. Nevertheless, the central government has repeatedly managed to pit local militias against one another or to convince them to sign cease-fire agreements -- albeit at a high price for the government.

Under the agreements, the militias are allowed to keep their weapons and control their tribal areas. This is a profitable business in a region in which opium production is booming and from which methamphetamines are flooding large parts of the world. Indeed, near the Chinese border, entire communities live off the profits from gambling and the illegal trade in rare animal species and tropical hardwoods.

For years, the government tried to deprive the militia fighters of their power by integrating them into its border-protection units. However, many militias have refused to cooperate, which has triggered the army's current showdown with the Kachin.

There are no signs of war in Rangoon, Burma's thriving center with its golden Shwedagon Pagoda, or in the tourist areas surrounding the old royal city of Bagan.

Businesspeople, as well as returnees that the old regime had driven into exile, are now testing the waters. They include Nigel Blackwood, a 39-year-old Englishman, and his 40-year-old Burmese wife, Marlar, who want to leave Great Britain and return home to Burma after some years in exile.

For the first time, the couple is venturing back into the country in which Marlar's father, a member of the military intelligence service, was sentenced to 142 years in prison and her brother to 14 years in a show trial. The charges against them included the illegal possession of foreign currency and importing a car. Now Marlar hopes that he and her brother will be granted amnesty. After that, she and her husband plan to open a travel agency.

"We want to show people that Burma is a beautiful country and not just a place of oppression," says Marlar, who has made peace with her old home.

Aung San Suu Kyi, who was recently permitted to address the people on television for the first time, is in a similar position. Sitting in front of her party's red flag, she called for a free press, an independent judiciary and constitutional reform.

But the censors apparently didn't like the part of her speech in which she criticized how the former military government had repeatedly used laws to oppress the people. It was edited out.