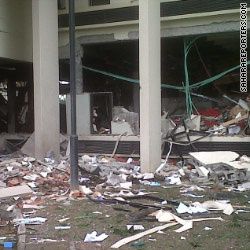 At least 18 people were killed in a bombing at a U.N. building in the Nigerian capital of Abuja, a police spokesman said Friday.

Rescue officials are at the scene helping to pull the dead and injured from the rubble. Bomb squad officers and other security teams were sent to the scene, deputy police spokesman Yemi Ajayi said.

Yushau Shuaib, a spokesman for Nigeria's National Emergency Management Agency, said the attack had been a car bombing.

The driver had passed through the first and second gates of the compound up to reception before detonating the explosives, Shuaib said.

A representative for the National Hospital said there was a shortage of blood to use in surgery. Hospital staff and relatives of the injured are currently going to the blood bank to donate.

The hospital has called in all doctors and nurses who were not working Friday to deal with the emergency, the spokeswoman said, as ambulances brought people in.

A witness outside the U.N. building at the time of the attack told CNN she had seen a white SUV drive through the main gate of the compound quickly.

She then heard two explosions in quick succession, the second one much larger and followed by the shattering of glass, before running to safety.

Images from the scene showed severe damage to the bottom floors of the building, with windows blown in and debris scattered around.

Alessandra Vellucci at the United Nations in Geneva, Switzerland confirmed that the "U.N. premises in Abuja have been bombed" but was unable to give more details.

The building is home to the main U.N missions operating in Nigeria and may have had as many as 400 people inside.

Eyewitnesses in the U.N. building told CNN there was an explosion, then an internal wall fell on some people, causing several casualties.

Abdulkadir said said the area was not very busy because it was a diplomatic district, with the Liberian and U.S.embassies nearby, but that there were people working there.

A spokeswoman for the U.S. embassy in Abuja, Deborah MacLean, told CNN that there had been no damage to the embassy building, which is half a mile from the U.N building.

Embassy personnel were initially told to be careful in case of further violence, she said.

Zoran Jovanovic, head of mission for the International Red Cross in Abuja, said the explosion was heard at 10:15 a.m. local time.

The U.N. building was in a large compound that had five gates, Jovanovic said, adding that the area was also home to western African embassies.

It is not yet clear who was responsible for the attack.

The Nigerian capital has seen a series of bombings recently.

In June, a car blast killed at least five people at the police headquarters in the city. It detonated less than two minutes after the federal police chief entered the building, a security source said at the time.

A month later, at least three people died in an explosion near a church outside the capital. The number of casualties could have been higher if services were still going on, according to a police spokesman.

In October, at least 12 people died when car bombs exploded as the nation celebrated 50 years of independence. The attacks near the Justice Ministry injured about 50.

The Movement for the Emancipation of the Niger Delta claimed responsibility for the October attack. MEND, an umbrella organization of several rebel groups, is battling the government for fairer distribution of oil wealth.

Recent attacks, including on the church and police station, may have been the work of a radical Muslim sect, Boko Haram, the nation's officials said this year. Boko Haram aims to enforce a strict version of Sharia law in the nation.

Africa's most populous nation is divided between a largely Christian south and a Muslim north.