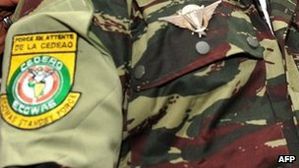 West African leaders have agreed to send troops to Mali and Guinea-Bissau following coups in both countries.

The regional grouping Ecowas said after an emergency summit that it expected both countries to organise presidential elections within the next 12 months.

Between 500 and 600 troops will be sent immediately to Guinea-Bissau.

At least 3,000 regional soldiers are ready to go to Mali to support the transitional government's fight against rebels which control the north.

The BBC's John James at the meeting in Abidjan says no timescale was set for the deployment to Mali, because the leaders were waiting for the Malian government to draw up details of their collaboration.

It is still unclear which regional countries will contribute to the Ecowas force, and even once ready, it will need financial and logistical outside help before it can be deployed.

But Ecowas warned the coup leaders in Guinea-Bissau that if they failed to agree to the deployment within 72 hours, they face targeted sanctions.

The troops will provide security during the transition to civilian rule.

The army took power on April 12, during presidential elections which were expected to elect the current prime minister Carlos Gomes Junior.

Soldiers say they staged the coup because of alleged plans by Mr Gomes to reduce the size of the army.

The interim President Raimundo Pereira and Mr Gomes were arrested during the coup in the small West African country, which has become a major staging post for gangs smuggling cocaine from Latin America to Europe.

No elected leader in nearly 40 years of independence has finished their time in office in the former Portuguese colony.

In Mali, a civilian government has been restored in the south following last month's coup that overthrew President Amadou Toumani Toure shortly before he was due to be replaced in elections.

The government in the capital, Bamako, is struggling to cope with rebels who want to create a separate northern state.

The current Ecowas chairman, the Ivory Coast President Alassane Ouattara, said the leaders were "confronted by the biggest ever threat to our democracy".

Speaking at the start of the meeting he said: "A strong response and the commitment of our allies is more than ever vital so that the region doesn't fall prey to terrorism and international criminality."

There are two main groups behind the rebellion in Mali: The secular National Movement for the Liberation of Azawad (MNLA) and Ansar Dine, an Islamist group that has started to impose Sharia in some towns.

The MNLA is made up partly of Tuareg who had fought in Libya on the side of Col Muammar Gaddafi and returned to Mali after he was killed.

They complain they have been ignored by the authorities in the south.