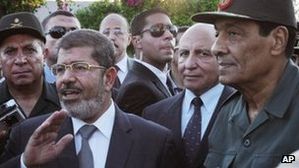 Egyptian President Mohammed Mursi has ordered the retirement of the powerful head of the country's armed forces, Field Marshal Hussein Tantawi, a presidential spokesman has said.

No explanation has so far been given.

President Mursi, who was elected in June, is a member of the Muslim Brotherhood.

Relations between the Brotherhood and the military have been tense since the fall of President Hosni Mubarak last year.

It is not clear whether the president has the power to sack the head of the armed forces, or whether Field Marshal Hussein Tantawi will accept the move.

Before Mr Mursi was sworn in, the Supreme Council of the Armed Forces (Scaf) stripped the presidency of many of its powers.

These include matters related to the military, including appointing its leaders and extending their terms in office, Egypt's interim constitutional declaration stated.

The military council also dissolved the Egyptian Parliament, which is dominated by the president's Islamist allies.

As head of the Scaf, Field Marshal Tantawi became Egypt's interim ruler after the fall of President Hosni Mubarak in February last year.