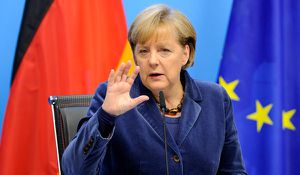 European leaders, in a significant step toward resolving the euro zone financial crisis, early Thursday morning obtained an agreement from banks to take a 50 percent loss on the face value of their Greek debt.

The agreement on Greek debt was crucial to assembling a comprehensive package to protect the euro, which has been keeping jittery markets on edge.

The accord was reached just before 4 a.m. after difficult bargaining. The severe reduction would bring Greek debt down by 2020 to 120 percent of that nation’s gross domestic product, a figure still enormous but more sustainable for an economy driven into recession by austerity measures.

The leaders agreed on Wednesday on a plan to force the Continent’s banks to raise new capital to insulate them from potential sovereign debt defaults. But there was little detail on how the Europeans would enlarge their bailout fund to achieve their goal of $1.4 trillion to better protect Italy and Spain.

After all the buildup to this summit meeting, failure here would have been a disaster. While the plan to require banks to raise new capital was generally approved without difficulty — banks will be forced to raise about $150 billion to protect themselves against losses on loans to shaky countries like Greece and Portugal — the negotiations over the Greek debt were difficult.

“The results will be a source of huge relief to the world at large, which was waiting for a decision,” President Nicolas Sarkozy of France said.

Chancellor Angela Merkel of Germany said: “I believe we were able to live up to expectations, that we did the right thing for the euro zone, and this brings us one step farther along the road to a good and sensible solution.”

In the face of considerable pressure from Europe’s leaders, the banks had been resisting requests that they voluntarily accept a loss of about 50 percent on their Greek loans, far more than the 21 percent agreed to previously. But after months of denying that Greece would have to restructure its large debt, which was trading at 40 percent of face value, European leaders forced the much larger reduction, known as a “haircut,” on the banks, while the International Monetary Fund promised more aid to Greece.

Germany had taken a tougher stance than France with the banks. Mrs. Merkel was willing to think about imposing an involuntary write-down on the private sector, but Mr. Sarkozy remained worried about the consequences on the markets and the banking system.

In a statement, Charles Dallara, managing director of the Institute of International Finance, which represents the major banks, said he welcomed the deal. He called it “a comprehensive package of measures to stabilize Europe, to strengthen the European banking system and to support Greece’s reform effort.”

In a meeting described as crucial for the fate of the euro zone, the leaders had been trying to restore market confidence in the euro and in the creditworthiness of the 17 countries that use it.

In what the leaders saw as an important first step, banks would be required under the recapitalization plan to raise $147 billion by the end of June — enough to increase their holdings of safe assets to 9 percent of their total capital. That percentage is regarded as crucial to assure investors of the banks’ financial health, given their large portfolios of sovereign debt.

German lawmakers voted overwhelmingly on Wednesday to authorize Mrs. Merkel to negotiate an expansion in an emergency bailout fund to $1.4 trillion, more than double its current size of about $610 billion. The vote followed Mrs. Merkel’s plea that the lawmakers overcome their aversion to risk and put Germany, Europe’s strongest economy, firmly behind efforts to combat the crisis, which has unnerved financial markets far beyond the Continent.

“The world is looking at Germany, whether we are strong enough to accept responsibility for the biggest crisis since World War II,” Mrs. Merkel said in an address to Parliament in Berlin. “It would be irresponsible not to assume the risk.”

The $1.4 trillion figure was generally accepted as the likely target for negotiators here, but many questions remained about how the enlarged fund would be financed.

Europe did not face any hard deadline to forge a deal, as it did recently when it had to act to head off a Greek default, but its leaders wanted to agree on a definitive plan to address the systemic aspects of the euro crisis rather than issue vague proclamations as they had so often in the past.

There was an informal deadline — the beginning of the Group of 20 summit meeting on Nov. 3 and 4 in Cannes, France. President Obama and other world leaders will arrive there expecting that Europe will no longer be a drag on the global economy.

The overall euro deal under discussion is complicated, weaving together the efforts to restructure Greek debt, increase the capital of Europe’s banks and expand the bailout fund so that it can ward off a financial panic in Italy — the euro zone’s third-largest economy — as well as in the relatively small economies of Greece and Portugal. Attention has focused on Italy because its government seems incapable of responding to the crisis, which has undermined the markets’ faith in Europe’s capacity to solve its problems.

Mrs. Merkel and Mr. Sarkozy upbraided Italy’s prime minister, Silvio Berlusconi, on Sunday for failing to follow through on his promises of budget cuts and various economic changes. But Mr. Berlusconi, hobbled by an internal power struggle, managed to bring only a “letter of intent” to Brussels outlining plans to carry out the kind of economic changes that his counterparts want.

The Europeans also want Mr. Berlusconi to live up to his promises to do more to reduce Italy’s huge accumulated debt and to promote economic growth in a largely stagnant economy. While Italy’s annual deficit is modest, the cost of financing its debt could tear holes in its budget if left unchecked.

Given reasonable progress made by Ireland, Portugal and Spain to fix their fiscal problems, the vulnerability of Italy’s far larger economy was the main reason the Europeans are trying to enlarge, or leverage, their bailout fund, the European Financial Stability Facility, which is considered less than half as large as needed to cover Italy’s debts. At least $200 billion of the fund is committed to Greece, Ireland and Portugal, and European leaders said they had agreed on two means of enlarging the fund.

One is to try to attract outside investors, who are likely to include China, Russia and some sovereign wealth funds. European leaders also agreed to use the fund to limit losses that bondholders might suffer in the future. By guaranteeing a portion of potential losses, the Europeans could leverage the size of the fund up to five times.