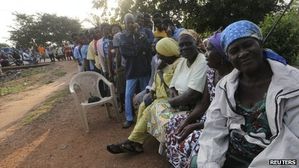 Long queues of voters have formed for parliamentary and presidential elections in Ghana, seen as a model for democracy in Africa.

A tight race is expected between President John Mahama, 54, and Nana Akufo-Addo, 68, in this newly oil-rich country - one of the world's fastest-growing economies.

A biometric voter identification system is being used for the first time.

After gaining the most votes in the first round, Mr Akufo-Addo, from the then governing New Patriotic Party (NPP), was praised for peacefully accepting his defeat.

That was the second peaceful transfer of power since military rule ended in 1992.

On Thursday, electoral commission head Kwadwo Afari-Gyan told the BBC that the biometric fingerprinting had been extensively tested over two months and again earlier this week, when security personnel voted, but added that if there were any problems, voting would be extended until Saturday.

"If everything is normal and goes smoothly, we give ourselves 72 hours [to announce the result]," Mr Afari-Gyan told the BBC's Focus on Africa programme.

The BBC's David Amanor in the capital, Accra, says there is an air of excitement in the country after weeks of frantic campaigning.

Prayers for peace were held before voting began in one polling station in the capital, Accra, Reuters news agency reports.

"We are proud of Ghana and hope that whoever wins will win without complications," said Haruni Safiyu, a 26-year-old labourer just before casting his ballot.

Whoever wins will oversee the continued oil-fuelled spending boom in the coming years.

Both candidates have promised to use the money to improve education provision.

Mr Mahama is expected to do well in his home area in the north, while Mr Akufo-Addo draws much of his support from urban areas and among members of his Ashanti community.

The NPP candidate is the son of a former president but denies that his privileged background means he does not care about the poor in a country where the average income remains less than $4 (£3) a day.

Some 14 million people have registered to vote in 26,000 polling stations nationwide.

Both Mr Mahama and Mr Akufo-Addo have promised to accept the result, but 5,000 soldiers have been put on standby just in case.

A run-off will be held on 28 December if no candidate wins more than 50% of Friday's vote.

There are six other presidential contenders and hundreds of candidates for the 275 parliamentary seats.