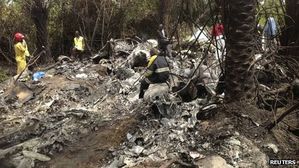 At least 10 members of a Guinean military delegation, reportedly including the army chief, have died when their plane crashed in Liberia, officials say.

No-one is said to have survived but it is not clear how many people were on board - some reports say up to 18.

It came down in Charlesville, near Monrovia's international airport, Liberia's Information Minister said.

Guinean military spokesman Alpha Barry said that armed forces head Gen Souleymane Kelefa Diallo was among those killed in the crash, according to the AP news agency.

The plane came down in an area of thick forest.

The Roberts International Airport is about 45km (32 miles) south of Monrovia.