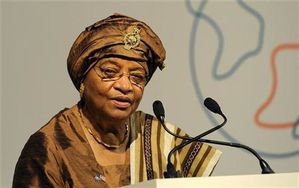 Liberia will hold a constitutional referendum on Tuesday to determine whether elections due in October will be pushed back, and the voting process itself will be seen as a test of the country's readiness for its second post-war election.

Other issues, such as residency requirements for presidential candidates and how lawmakers will be voted in, are also at stake, but the poll will provide a litmus test for a nation still struggling to overcome decades of misrule.

Although the country's civil war ended in 2003 and investors are snapping up mining and oil contracts, Liberia's United Nations-backed peace is fragile as the country is awash with frustrated, unemployed youth and former combatants.

President Ellen Johnson Sirleaf, a former World Bank official who has won widespread international praise for her work rebuilding the country, is still struggling to convince many in the country change is coming fast enough.

"Whether the next presidential elections are peaceful, free and fair will depend on how well the National Elections Commission (NEC) handles the challenges of the 23 August referendum ... and opposition perceptions of bias toward the president's Unity Party," the International Crisis Group think tank said in a August 19 report.

Some 1.8 million people will be eligible to vote and the over 9,000-strong U.N. peacekeeping mission is due to help police and provide logistics for voting across the country.

The four issues voters will be deciding on are the reduction of a residency clause for presidential candidates to five years from ten years, an increase in the retirement age of Supreme Court judges to 75, the implementation of a simple majority vote for legislature, and the timing of elections.

Liberian presidential elections have traditionally been slated for October, when the rainy season can make travel and other vote logistics difficult. Voters will be able to decide in the referendum to delay the election until November.

The referendum has divided opinion and heightened tensions in the west African nation, with some backing the referendum, while others see it as an attempt by Sirleaf to strengthen her hold on power.

The ruling Unity Party (UP) favours a 'yes' vote on all four issues, while some opposition parties, including the main Congress for Democratic Change (CDC) of former international soccer star George Weah, have called for a boycott.

"I call on all supporters of the Congress for Democratic Change to boycott the upcoming referendum because it is unconstitutional," CDC presidential candidate Winston Tubman told his supporters at a recent rally.

Augustine Wreh, a student at a local university, said he will not be voting in the referendum.

"I do not support this referendum at all. We have had these laws for many years. Why does this government want to change it now? I think the UP has a hidden agenda on this referendum," he said.

Local analysts see the vote, and whether they will be able to accept the results of the referendum and avoid any outbreaks of violence, as a maturity test for the Liberian political class.

Dan Sayeh, director of the Liberia Democratic Institute think tank, said Liberian political leaders need to provide a clear path from any impasse after the referendum, while guarding their supporters against violence.

"I hope we will accept the result of what will come out (of the polls), that is my main concern," he said.