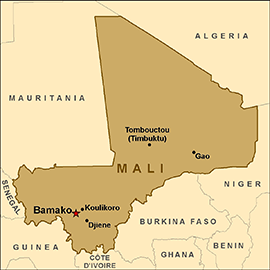 Hundreds of Malians set up barricades and burned tyres in the streets of Bamako on Thursday, shutting down the capital in the latest protests against a rebellion that has seized several northern towns, and the government's handling of it.

The protest in the capital comes after the Tuareg-led rebels, who are fighting for an independent north, took control of the northeastern town of Menaka.

Dozens of people have been reported killed and thousands of civilians have fled their homes after the rebels launched a three-pronged assault south in mid-January.

But the demonstrations, sparked by local reports that the military ran out of ammunition and that dozens of soldiers may have been executed during rebel attacks, have raised the prospects of clashes between Malian communities.

A Reuters reporter in Bamako said shops were shuttered early in the afternoon and smoke hung over parts of the city after tyres had been set on fire.

The centre of town was largely deserted except for groups of youths wandering around, the reporter said.

The protests come a day after witnesses said the wives and relatives of Malian soldiers serving in the north attacked government buildings and targeted at least one business run by a Tuareg in the town of Kati, just northwest of Bamako.

Local media reported that the women had earlier tried to march on to the presidency to complain that Mali's army was short of equipment and experience in fighting the rebels.

The bloodiest of the clashes so far seems to have taken place in Aguelhoc, in Mali's far north, where Malian military officials, speaking on condition of anonymity, say dozens of soldiers were killed, with many executed.

Bamako has accused the rebels of atrocities and collaborating with local al Qaeda groups but not given any official toll. The MNLA has strenuously denied any al Qaeda link, accusing the government of trying to spread propaganda.

Military sources said on Thursday that the MNLA rebels had taken control of the town of Menaka after the military withdrew.

"We are in the process of regrouping. Our men have pulled out of Menaka and when we left the rebels entered the town. It was a tactical retreat," a military source told Reuters.

In his first public statement since the rebellion began, Mali's President Amadou Toumani Toure late on Wednesday pledged not to give in to separatist demands but, in a sign of concerns that the conflict could spread, called on Malians to refrain from attacks on any particular community.

"Do not confuse those who are shooting at military bases with those who are living amongst us, who are our neighbours, colleagues," he said on state television.