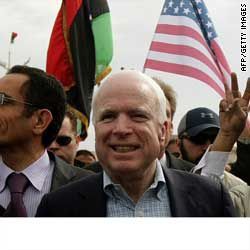 McCain arrived a day after U.S. Predator drones were deployed in the North African nation as part of the NATO-led military efforts there.

Several demonstrators waved American flags as a crowd of about 100 Libyans greeted the Arizona lawmaker.

Some chanted, "Thank you John McCain! Thank you Obama! Thank you America! We need freedom! Gadhafi go away!"

Abdul Hafiz Ghoga, deputy chairman of the opposition Transitional National Council, was among a group of rebel leaders who accompanied McCain on a visit to the city's Freedom Square.

McCain paused at a courthouse wall covered with scores of pictures of people allegedly killed by Gadhafi's forces and others who have gone missing since uprisings began.

"The American people support you very strongly, and we know it's necessary to help as much as we can," McCain told a woman who thanked him for U.S. support.

The U.S. lawmaker did not address the crowd as he toured the square Friday morning, but was expected to speak to reporters later in the afternoon.

McCain, the ranking member of the U.S. Senate Armed Services Committee, has argued that the U.S. should step up efforts to end Gadhafi's nearly 42-year rule.

"We are not doing everything necessary to achieve our policy goals," McCain said last month after NATO took over enforcement of a no-fly zone. "I hope we don't learn a bitter lesson."

McCain describes himself as a "strong supporter" of U.S. President Barack Obama's decision to take military action in Libya, but has argued for a tougher stance.

"Let's be honest: Our objective in Libya is regime change, whether the administration wants to call it that or not. ... Rather than playing a supporting role within NATO, America should be leading," McCain said at a committee hearing earlier this month. "Our military should be actively engaged in degrading Gadhafi's forces in the field, which could significantly increase the pressure on his regime and the odds that it will crack."

U.S. Defense Secretary Robert Gates disclosed that the U.S. drones were deployed Thursday, but poor weather forced them to return.

Unmanned aerial vehicles offer more precise targeting, because their low-flying capability allows for better visibility, "particularly on targets now that have started to dig themselves into defensive positions," Gates said.

Large explosions and the sound of jets over Tripoli Thursday night indicated NATO has likely increased the intensity of its airstrikes on Gadhafi's key command and control military sites.

The alliance has issued a new warning to Libyan civilians to stay away from military areas, foreshadowing plans for attacks on targets seen as strategically significant in stopping the government's attacks against civilians, a NATO military official said Thursday.

The next phase will largely involve increased airstrikes on key Gadhafi command, control and communications sites in and around Tripoli, although targets in other areas could be hit as well, said the official, who declined to be identified due to the sensitivity of the matter.