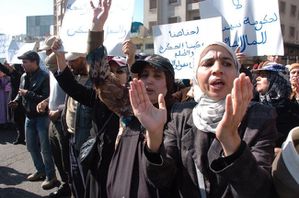 In an interview last week, a top aide to Mr. Benkirane, Mustapha Khalifi, speaking in a personal capacity, confirmed media reports that the prime minister would support an initiative to allow abortions in cases of rape and incest.

Mr. Khalifi, subsequently appointed the communications minister, said in an interview that the government should push ahead with a proposal, drafted by the social and family affairs minister in the previous government, Nouzha Skalli, to address the steep rise both in illegal abortions and in the number of unmarried mothers caught in the poverty trap.

“We should start dealing with this issue,” Mr. Khalifi said in Rabat. “We can’t ignore it any more.”

The government’s new position on the issue was unexpected. Before the elections when it was in opposition, Mr. Benkirane’s party, Justice and Development, or P.J.D., took a tough line on moral issues. It lobbied unsuccessfully, for example, for a ban on a performance by the British singer Elton John at the 2010 Mawazine Music Festival because of Mr. John’s homosexuality.

But the party appears to have acquiesced to a shift in public opinion after a recent rise in back street procedures made abortion a topical political issue.

On Dec. 12, three weeks after the Justice and Development Party won 107 seats out of 325 in the parliamentary elections, an opinion poll published by the popular French-language magazine Actuel showed that half of respondents wanted abortion to be legalized in cases of incest or rape.

Morocco is one of the more liberal Muslim countries and allows the early termination of pregnancy, with spousal consent, to save the life of the woman or to preserve her physical or mental health. Still, abortion is stigmatized socially, legally and religiously, and abortions for unmarried women are illegal, resulting in high numbers of illegal terminations. A 2008 study, the most recent available, put the number of abortions in Morocco as high as 600 a day.

Last week a leading gynecologist, Chafik Chraibi, put the figure even higher. Dr. Chraibi, a professor of gynecology at Mohammed V University in Rabat, who is an ardent campaigner for legalizing abortion, said the real figure “is probably closer to 900 a day, when you take into account the nonmedical abortions carried out at home.”

“In Morocco, according to the World Health Organization, 13 percent of maternity deaths are from abortions,” he said.

Women coming to him after botched terminations — often carried out in makeshift operating rooms in filthy basements — were frequently “mutilated,” with many suffering from hemorrhaging uteri or perforated abdomens, Dr. Chraibi said.

In home abortions, friends, cousins and “traditional midwifes” often perform procedures with herb concoctions and cocktails of aspirin and cola.

For the few who can afford the lowest priced illegal operation, at 2,000 dirhams, or $230, the abortion is carried out by an enterprising general practitioner in a makeshift operating room. In such cases, the woman risks a prison sentence of up to two years. The doctor, if the patient dies, faces a prison sentence up to 20 years.

The surge in illegal procedures identified by Dr. Chraibi mirrors a similar rise in the number of unmarried mothers. In Casablanca alone, the sprawling, hectic commercial capital of four million people, 27,000 single unmarried mothers were recorded in 2009, according to the Institution Nationale de Solidarité avec les Femmes en Détresse.

For all its apparent pragmatism on the issue, the government’s willingness to drive the abortion law through is questioned by some opposition members of Parliament.

“It’s encouraging that the P.J.D. are looking at it, although I’m skeptical” said Fatiha Layadi, a member of the Authenticity and Modernity Party. “I think they would prefer that it dragged on.”

Mr. Khalifi conceded that the issue had divided religious politicians in the past. But now, he said, he wanted to get tough on doctors practicing illegally, whom he calls “butchers.”

“The new government will deal with these problems rather than escape from them,” he said, “although I expect it will be civil society and the media who will lead the debate.”

Still, Mr. Khalifi said, the problems stemmed from poverty and the state’s failure to take responsibility.

He said a radical new emergency “family solidarity” fund of around $57 million would be created in the coming months to help Morocco’s poorest — and notably for mothers “where the fathers have refused to accept responsibility.”

On abortion itself, he said Islam allows “in certain circumstances” termination in “less than 40 days.”

Significantly, the issue is controversial not only for Islamists, but also for feminists.

Aicha Ech-Channa, who set up a support group for single mothers in Casablanca in 1985, Solidarité Féminine, is a harsh critic of legalized abortion. An icon of women’s rights in Morocco who won the humanitarian Opus Prize in 2009, Ms. Ech-Channa argues that abortion is not the solution to Morocco’s single-mother crisis.

“It’s a vicious circle at the moment, as many single mothers end up being prostitutes,” she said. “First off, I think we should abolish both the laws which punish women for having sex before marriage and the current Article 446, which refuses to give any rights to the children.”

Ms. Ech-Channa favors legalization of abortion only in cases of rape.

Ms. Latadi of the Authenticity and Modernity Party said she agreed that abortion should be legalized after rape but also possibly in other circumstances.

“We have to go through with legalizing abortion, certainly for some cases,” she said. “We had recently a 15-year-old girl who became pregnant from her brother. What do we do with such cases?”