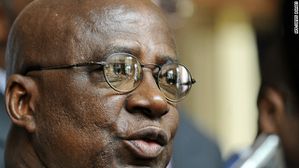 Three top allies of Ivory Coast's former president, Laurent Gbagbo, have been arrested in less than a week, raising political tension in the West African nation, where the nation's army has been hit by weeks of attacks.

Akoun was arrested for having defamed President Alassane Ouattara during a recent meeting with some of the party's members and supporters in an Abidjan cafe, said Sylvain Miaka Oureto, the party's leader. He also is accused of harming state security because of what he said during the meeting, Oureto said.

He said Akoun was still in custody Monday evening.

Akoun, the current deputy chief of the party, was heading to a party rally when the nation's gendarmerie -- a paramilitary force -- arrested him and transferred him to Abidjan, said Augustin Guehoun, the head of communication for the party.

His arrest follows that of two former Gbagbo Cabinet ministers, one of them in Ghana, where he had sought refuge.

Oureto said the series of arrests against the party's high-ranking officials is intended to "behead the Front Populaire Ivoirien." He said the government is "man hunting" against the leaders of the party.

At least seven attacks have been carried out since August 5 by unidentified gunmen against the Forces Republicaines de Côte d'Ivoire, Ivory Coast's national army. At least 17 people were killed in the attacks, including 10 Ivorian soldiers.

In the latest raid, carried out Saturday, four people died when an army's checkpoint was attacked by four armed men at Irobo, about 100 kilometers west of Abidjan, said Paul Koffi Koffi, minister delegate to defense. One civilian, one soldier and two attackers were killed, he said.

Ivory Coast's authorities say Gbagbo's supporters are behind the attacks, intended to destabilize the West African country, which is recovering from a five-month post-election crisis that killed more than 3,000 people last year.

Oureto denied the party is connected to any of the violence that has hit the country in the past month. He said the reasons for the recent attacks have to be investigated in light of the failing process of disarmament and reassimilation of former fighters.

The political standoff was sparked last year when Gbagbo refused to acknowledge his defeat in a November 2010 presidential election and hand over power to Ouattara. Gbagbo was arrested in April 2011, after 10 days of war, in Abidjan.

Ouattara addressed the recent attacks Sunday, saying he condemned those "reprehensible acts," and adding that "this violence is the arm of desperate persons." An extraordinary security meeting is to held Tuesday to assess the security situation in the country, he said.

The Front Populaire Ivoirien's headquarters in Abidjan also were attacked on August 18, and the party has accused the government of staging that incident.

Laurent Akoun is the third Gbagbo's top ally to be arrested in less than a week by Ivory Coast's authorities. Alphonse Douati, a senior member of the party and former Cabinet minister in Gbagbo's administration, was arrested last Tuesday and has been charged with harming state security. He is accused of financing the recent attacks.

Justin Kone Katinan, a spokesman for Gbagbo during last year's standoff and the ex-budget minister, was arrested on August 24 in neighboring Ghana, where he sought refuge after the collapse of Gbagbo's administration in April 2011.