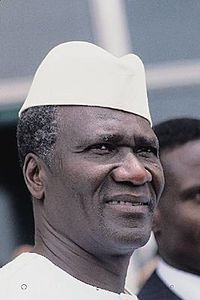 Ahmed Sékou Touré, the man who famously said to General Charles de Gaulle, “We prefer poverty in liberty to riches in slavery” and led Guinea to independence in 1958, died on 26 March, 1984. He had spent the last 26 years leading the one-party regime of the Parti Démocratique de Guinée (PDG).

In 2004, in recognition of “his exceptional contribution to a free, united, peaceful and prosperous Africa”, the government of South Africa bestowed upon the late Guinean leader the prestigious of the Companions of O.R. Tambo (Gold) award. This posthumous decoration grouped him amongst the likes of Mahatma Gandhi, Patrice Lumumba, Martin Luther King Jr., Amilcar Cabral, Kwame Nkrumah, Gamal Abdel Nasser, Jawaharlal Nehru, and Modibo Kéita.

But how did this self-educated Afro-socialist of Muslim upbringing rise to such international prominence? What was his political philosophy? What were the high points and low points of his 26-year rule as Guinea’s head of state? And what kind of legacy did he leave behind?

From school dropout to secretary-general

Sékou Touré was born in 1922 in the village of Faranah in central French Guinea. He attended, but in 1937, at the age of 15, was expelled from Georges-Poiret technical school in the capital Conakry for alleged insubordination. On leaving the college, he managed to obtain entry-level employment as a postal clerk. It was in the postal sector that Touré’s public life began when, in the early 1940s, he became a local labour organiser. By 1945 he had co-founded a postal workers union and had become its general-secretary.

In the following years, Touré rose in prominence in the broader labour movement, but also became deeply involved in Pan-African activities. In 1946, Félix Houphouët-Boigny – a man who would go on to be the Ivory Coast’s president for 33 years and become one of Touré’s adversaries – created the Rassemblement Démocratique Africain (RDA), an anti-colonial party covering French African colonies. In 1947, Touré helped establish the RDA’s Guinean chapter (PDG-RDA). And in 1952, as the PDG-RDA was struggling against colonialism and gaining stronger support from both the establishment and local ethnic groups, Touré became its secretary-general. In 1955, Touré rose even higher as he was elected to to French Guinea’s Territorial Assembly as the representative of the municipality of Beyla.

By this time, Touré’s labour leadership had also been maturing impressively, especially since the groundbreaking 1953 general strike, which he successfully organised and headed in his double capacity as both a  and RDA leader, calling for the adoption of an equitable labour code for African workers. As a result of this 66-day strike, the French government was eventually forced to issue a decree on 27 November increasing the hourly minimum wage by 20% throughout French West Africa. Around this time, the number of labour union members in French Guinea soared, from about 4,600 in 1953, to 20,000 in 1954, to 44,000 in 1955.

These union members as well as other sympathisers all over the country also flocked to the PDG, thereby broadening and strengthening the party’s political base and gradually changing its profile from an urban-based organisation to a truly national political grouping capable of competing and winning elections. Indeed, in the January 1956 legislative elections, two of the three seats allocated to French Guinea in the French National Assembly were won by the PDG. Sékou Touré and Saïfoulaye Diallo were chosen to be the PDG’s two representatives, while Diawadou Barry of the Bloc Africain de Guinée (BAG) took the third seat.

The march to independence

The year Touré was elected to the French National Assembly, the same body passed legislation sponsored by Overseas Minister Gaston Defferre providing for limited self-government in France’s African territories. Called the Defferre Blueprint Law, it provided for the creation of semi-autonomous territorial government councils to be headed by African vice-presidents under the presidency of French territorial governors.

New Territorial Assemblies would also be established under the law, and in March 1957, momentous legislative elections were held in French Guinea to elect representatives to the assembly. The PDG won 56 of the 60 seats available, and Sékou Touré was appointed vice-president of the government council under Governor Jean Ramadier. Saïfoulaye Diallo, the PDG’s number two, became head of the new Territorial Assembly.

During this time, Touré labour activities were also ongoing, and in January 1957, his leadership had gone continental when he and likeminded colleagues met in Cotonou, Dahomey (present-day Benin), to found the Union Générale des Travailleurs d’Afrique Noire (UGTAN). This organisation, which encompassed labour movements from across France’s West and Central African colonies, was created with a view to developing a truly African labour movement free from French control, and Touré was elected to be its first president.

To add to his run of electoral victories in 1957, Touré also became Mayor of Conakry, meaning that by the year’s end, the school dropout was concurrently mayor of the capital, president of UGTAN, vice-president of the Government Council of French Guinea, deputy to the French National Assembly, member of the AOF Grand Conseil (French West Africa’s legislative body based in Dakar, Senegal), secretary-general of the PDG, and a member of the RDA leadership. Although this particular proliferation of titles was relatively short-lived, some see this period as having been instrumental in the making of a future president with little inclination for the democratic sharing of power.

Whatever this was the case or not, Sékou Touré forcefully forged his place in world history between 25 August and 2 October, 1958. On 25 August, he told General Charles de Gaulle that the African people will never, under any circumstances, renounce their natural rights to freedom and liberty. He added that Africans are not French and that Africa cannot be reduced to French territories, before announcing famously: “We prefer poverty in liberty to riches in slavery.”

Then, on 28 September, Guinea stood alone amongst its fellow African counterparts in responding with a resounding “no” to de Gaulle’s proposal that instead of full independence, France’s African territories become part of a semi-colonial French-African Community. As a result of this position, Guinea proclaimed its independence on 2 October, 1958, with Sékou Touré as its head of state.

As revealed in his two dozen volumes and numerous PDG booklets, Touré’s political philosophy revolved around a mixture of: Marxist-Leninist-inspired theory of Afro-socialism; a Maoist-inspired conception of populist ideology of single-party rule; a Pan-Africanist doctrine of African emancipation and unity inspired by the political thoughts of Ghanaian leader Kwame Nkrumah; and a philosophy of nonalignment inspired by the thoughts and actions of Tito of Yugoslavia, Sukarno of Indonesia, Gamal Abdel Nasser of Egypt, and, again, Nkrumah.

Judging by his policy pronouncements and political actions, Touré was a hardliner when it came to defending the liberty and dignity of Africans from any foreign encroachment. He also adhered to the ideal of African unity and collective self-reliance in the face of what he perceived as Western neo-colonialism. Ultimately, though, the political behaviour of President Touré was heavily influenced by real-life conditions, including but not limited to events such as France’s attempts at isolating and defeating his regime, inadequate aid from the Soviet Union and the Cold-War Socialist Bloc, and the gradual ousting of his closest ideological allies on the continent, from Patrice Lumumba of the Congo (1961), to Ahmed Ben Bella of Algeria (1965), to Nkrumah of Ghana (1966), to Modibo Kéita of Mali (1968).

Despite these challenges, Touré nevertheless managed to maintain a decent presence on the African stage by actively supporting (militarily and otherwise) national liberation movements on the continent, including in Guinea-Bissau, Cape Verde, Angola, Mozambique, and South Africa. Moreover, under his leadership, Guinea was actively involved in the founding of regional and continental organisations such as the Organisation of African Unity (OAU, 1963), the Organisation of Senegal River States (OERS, 1968), and the Economic Community of West African States (ECOWAS, 1975). Touré had teamed up with his Ghanaian counterpart to create the Ghana-Guinea Union in 1958; it was renamed the Union of African States in 1959 and expanded in 1961 when the newly-proclaimed Republic of Mali joined what was intended to serve as a nucleus for the United States of Africa. Although that dream never materialised, President Touré warmly welcomed former President Nkrumah following the latter’s abrupt ousting in a military coup in February 1966, and proclaimed him co-president of the Republic of Guinea.

On the domestic front, Touré’s regime made some remarkable strides in the areas of women’s rights, youth empowerment, the cultural valorisation of African heritage, and education. On the other hand, he equated Guinea’s attainment of independence with a movement known as the Révolution Démocratique Africaine (RDA) [not to be confused with Houphouët-Boigny’s RDA party] and in 1968 officially launched a questionable national cultural revolution. Under the apparent ideals of the RDA, Touré developed a theory and practice of single-party rule grounded on the utopian idea that a party-state system of government would, ultimately, foster a people-state in which the political maturity of the Guinean populace would enable them to self-govern without the need for a coercive state. This worldview excluded any form of political pluralism and, by the same token, alienated a large number of Guineans interested in multiparty democracy.

Faced with a growing underground opposition both inside Guinea and abroad, exacerbated by a lack of economic development in spite of Guinea’s abundant natural resources, Touré and the PDG leadership radicalised their system of government and proclaimed the existence of a perennial plot against the Guinean state. This was especially the case after a Portuguese and Guinean dissident invasion of the country was defeated in 1970. With this approach, which soon became the hallmark of the Touré regime, dissent was dealt with harshly, making political purges of real and imagined traitors a routine occurrence.

Sékou Touré only relinquished office with his death on 26 March, 1984, at the Cleveland Clinic Foundation in the US. At the age of 62, his tendency to amass titles and additional responsibilities still hadn’t worn off, and he died whilst serving as the second vice-president of the Organisation of the Islamic Conference (OIC), president of the Ad Hoc Committee on the Al-Quds Mosque, and was preparing to become the executive chairman of the OAU.

He left behind a mixed legacy. The late Guinean historian and author of one of Touré’s biographies, Ibrahima Baba Kaké, summed up the leader’s public profile well in his title, Sékou Touré: le héros et le tyran (Sékou Touré: the hero and the tyrant). Indeed, both the hero and tyrant are clear to see in the history of anti-colonialism’s freedom fighter, Africa’s icon of solidarity, and Guinea’s autocratic father. Nevertheless, if history is any guide, the thorough and balanced decanting of Touré’s legacy will take time. The question in the meantime is whether the Guinean people are prepared to stop portraying Sékou Touré as either a saint or as a devil, and start treating his legacy with rational discernment, as the Ghanaian people have started to do with their own complex champion of Kwame Nkrumah.