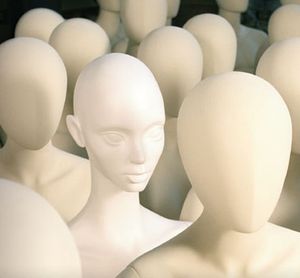 THE problem with understanding human uniqueness is precisely that it is unique. Though the proper study of mankind may be man, that study will yield little if there is no reference point to compare man with.

That, at least, is the philosophy of Svante Paabo of the Max Planck Institute for Evolutionary Anthropology, in Leipzig. Dr Paabo, whose work on fossil DNA was the inspiration for “Jurassic Park”, has since become interested in human evolution. To this end, he and his colleagues have sequenced the DNA of both Neanderthal man and an Asian species of prehistoric human, the Denisovians, which Dr Paabo’s own work identified.

Now he has turned his attentions to modern Homo sapiens. In collaboration with a team from the Chinese Academy of Sciences, Dr Paabo and his colleague Philipp Khaitovich have compared genetic activity over the course of a lifetime in the brains of humans, chimpanzees and rhesus monkeys. They have then matched what they found with what is known of Neanderthals, and think they have thus discovered at least part of the genetic difference between Homo sapiens and the others that creates human uniqueness.

Dr Paabo and his colleagues focused their examination, just published in Genome Research, on two parts of the brain. One was the dorsolateral prefrontal cortex, which is the seat of abstract reasoning and social behaviour—things that humans are particularly good at. The other was the lateral cerebellar cortex, which is more to do with manual abilities. They extracted cells, post mortem, from people, chimps and monkeys of many ages, and looked at which genes had been active in these cells when the owners were alive.

The vortex of the cortex

They did this by examining the RNA in the cells. RNA molecules are single-stranded copies of the double-helical DNA genes in the cell nucleus. Their job is to carry instructions from the genes to a cell’s protein-making machinery. Most primate genes have now been identified, so it is possible to make chips covered with complementary strands to the RNA messengers, to which these messengers will uniquely stick, and which thus act as probes for particular messenger molecules.

Using such chips, Dr Khaitovich and Dr Paabo were able to find out when, during the course of life, particular genes were active, by working out how much RNA from each gene cells from particular parts of the brains of individuals of different ages contained. Their results fell into six categories.

First, they found some genes whose expression patterns over a lifetime were uniquely human (ie, were the same in chimpanzees and monkeys, but different in people) and others that were uniquely chimpanzee (ie, the same in people and monkeys, but different in chimpanzees). Second, they discovered that there were more uniquely human expression patterns than uniquely chimp ones. Third, unique human expression patterns were more common in the prefrontal cortex than in the cerebellum. Fourth, though these uniquely expressed genes were most active in the young of all species, their period of activity was several years longer in humans than in the others. Fifth, the activities of a lot of the uniquely active genes seemed to be correlated: the researchers identified seven groups of genes (five in the prefrontal cortex and two in the cerebellum) which each seemed to be working as a module. And sixth, these modular genes seem to be involved in the crucial job of linking nerve cells together through junctions called synapses.

To summarise, human beings have suites of genes that probably cause their brains to be “plastic” and thus receptive to change far longer (to the age of about five) than is true for chimps or monkeys (whose brains are plastic for less than a year after birth). Moreover, Dr Khaitovich was able to work out how the expression of these modules of genes was co-ordinated, by looking at the switches, known as transcription factors, that turn them on and off.

Indeed, by comparing modern genomes with their discoveries about Neanderthals Dr Paabo’s group has found that the regulatory process for one of the modules came into existence after the modern human and Neanderthal lines separated from one another, about 300,000 years ago. Unfortunately, it is not possible to look at the expression pattern of genes in Neanderthals, and it probably never will be. But it might be possible, as knowledge advances, to reconstruct part of it from a better understanding of that extinct species’s DNA. “Pleistocene Park”, anybody?