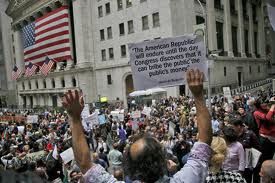 Bridge traffic heading to Brooklyn from Manhattan was shut down for several hours, finally reopening at 8:05 p.m., police said. Manhattan-bound lanes were open during the incident.

Protesters banged drums and chanted, "The whole world is watching" as police moved in to make arrests for disorderly conduct and blocking traffic.

"Over 500 were arrested on the Brooklyn Bridge late this afternoon after multiple warnings by police were given to protesters to stay on the pedestrian walkway, and that if they took roadway they would be arrested," said Paul Browne, deputy commissioner for the New York Police Department. "Some complied and took the walkway without being arrested. Others proceeded on the Brooklyn-bound vehicular roadway and were arrested."

Saturday's incident came during a campaign against what protesters call social inequities resulting from the financial system.

Protesters held a rally at Zuccotti Park and then marched toward the Brooklyn Bridge.

U.S. Rep. Charles Rangel, D-New York, spoke to a large crowd of boisterous protesters, who shouted, "This is a peaceful march."

Over the past two weeks, demonstrations have addressed various issues, including police brutality, union busting and the economy, the group said.

Taking its inspiration from the Arab Spring protests that have swept through Africa and the Middle East, the group has taken up residence in the park in New York's financial district, calling for 20,000 people to flood the area for a "few months."

The protest campaign -- which uses the hashtag #occupywallstreet on the microblogging site Twitter -- began in July with the launch of a simple campaign website calling for a march and a sit-in at the New York Stock Exchange.